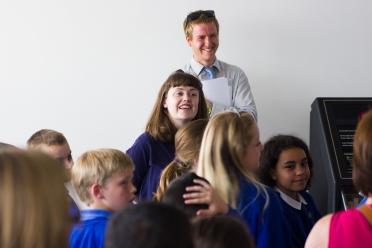 Taking cue from Lincoln’s historic connections with the Magna Carta and the Charter of the Forest artist Ruth Ewan developed a series of workshops with young people from The Meadows Primary School which resulted in the realisation of a new work responding to the continuity of ideas put forward via these historic charters.

Through a series of close workshops with the artist, young people used these documents to provoke and articulate their own demands of their world. Through collaborative writing and drawing exercises they imagined places they want to see and laws they want to live by. These workshops resulted in a series of slogans, text works and drawn maps. Selected words and slogans from the workshops feature in a series of letterpress prints produced with Lincoln’s Caseroom Press. One of the reimagined maps was been developed by Ewan and expertly crafted into an alternative globe. The globe was shown at the Lincoln Central Library, launching on 15th June, the anniversary of the signing of Magna Carta.

Further information and a video about the project here.