The Sheffield Pavilion 2009 was first screened and distributed during the opening days of the 11th Istanbul Biennial at Büyük Londra Hotel, presenting the work of Sheffield-based artists and promoting contemporary art activity taking place in Sheffield, UK in an international context. It features an essay by artist / curator Ian White and is designed by renowned Sheffield-based design firm The Designers Republic.

This was the second Sheffield Pavilion, the first having taken the form of a book presenting new work by ten Sheffield-based artists, which was launched at the Venice Biennale and distributed at Documenta and Munster during the ‘grand tour’ of coinciding art events in 2007.

The construct of the ‘Pavilion’ (a temporary structure used for leisure, entertainment or exhibition) has again been used to structure the project and the artists’ contributions. A nomadic pavilion is easy to pack up and move on to further seek its audience and it can respond to the migratory movements of the art world with equal levels of critique and complicity.

The works span from considerations of the possible future of a quarry for a notional property development (No Fixed Abode) to the peculiar phenomena of the English model village (Steve Hawley); from the contradictory status of music in the Islamic faith (Haroon Mirza) to the complex citizenship ceremonies instigated by British municipal councils (Katie Davies). They include a presentation of overlaid images of each world leader during George W Bush’s tenure in the White House (where the dictatorships have static, clear images and heads of democratic states are overlaid like palimpsest) (Richard Bartle), an exploration of the architecture of a car park in relation to Coleridge’s stately pleasure dome in Kubla Khan (Tony Kemplen) and a unique portrait of Sheffield’s (in)famous Park Hill estate, created during an eclipse period between clearance and reinvention (Esther Johnson). Other works feature flawed footage of Saturn reedited (Hondartza Fraga), a description of the world from space if all you could see of it were the series of images carried on the Voyager satellites (Third Angel), an alien landscape of eternal midnight sunshine on the edge of the arctic circle (Chloë Brown) and a re-presentation of landscape through modified fragments of atmospheric imagery (Paul Morrison). 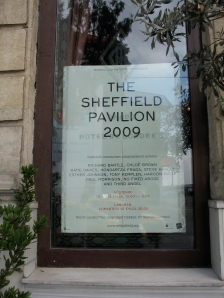