The Sheffield Pavilion 2007 was a project designed to take advantage of the harmonic convergence of super exhibitions which occured when The Venice Biennale, Documenta XII, and Skulptur Projekte Münster 07 coincided in June 2007. This nexus of projects falling together (an event which only occurs once every 10 years) offered a unique opportunity to symbiotically present the work of ten Sheffield-based artists and promote the contemporary art activity taking place in Sheffield in an international context.

The idea of a Sheffield Pavilion was inspired by the traditional format of the Venice Biennale, where different countries are represented by pavilions. The Sheffield Pavillon was a new variation on a small series of city or location-specific interpretations of the national pavilion construct; from the Manchester Pavilion’s art-free bar to the New Forest Pavilion’s more formal exhibition venue. These city/region specific pavilions perhaps aim to challenge the notion that art practice in non-metropolitan areas operates on a provincial or parochial level or conversely suggest that the international art world is simply another such parish. However The Sheffield Pavilion was a new format for a city’s involvement in events such as The Venice Biennale. A pavilion in book form is a structure curiously attentive to the roots of the word, in the Latin for butterfly, and in its subsequent usage to signify a tent or temporary structure used for leisure, entertainment or exhibition. The Sheffield pavilion was similarly airborne, nomadic, a moveable feast, an exhibition in book form or a paper based architecture for art. 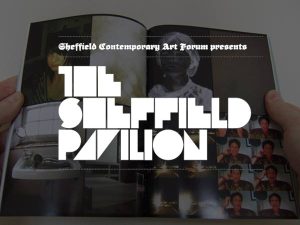 The book was launched at Venice at Bar Margaret Duchamp, Campo Santa Margherita, Dorsoduro, Venice, Italy on Friday 8 June and was distributed the following week in Kassel, concurrent with the Documenta XII festival. We also took the book to Munich, Germany, to be given out at Skulptur Projekte Münster 07.

The Sheffield Pavilion was designed by the city’s renowned The Designer’ Republic and the artists’ broader practice represented on a DVD presented alongside it. The publication provided a curatorial resource but also exists as a work in itself. The book was not intended as an audit of artistic practice in Sheffield, but the first of (hopefully) many different ways of presenting aspects of the Sheffield art scene to a wider audience. The hope was that the project would act as a portal to contemporary art in Sheffield, representing artists’ work, practice and methodology as a vital and vibrant part of the city and making Sheffield–based artists more visible to an international network. The Sheffield Pavilion continued the city’s international visibility after Echo/City – an exhibition of works about Sheffield – was selected to represent Britain in the 2006 Venice Architecture Biennale.

The selected artists presented new projects designed specifically for the book form. Tim Etchells undertook a creative exploration of the ‘track changes’ function in Microsoft Word, Penny McCarthy’s drawings included a facsimile of a letter from the NASA archive drafted should the crew of the first moon landing be lost in space, Matthew Harrison documented the production and progress of an unsolicited desk nameplate for Professor Colin Pillinger of the ill-fated UK Beagle 3 Mars probe, Farhad Ahrarnia presented a collage of extracts of articles and drawings by writer/journalist Maggie Lett for Tehran Journal in 1969, Neil Webb produced a spectrographic and sound mapping of a microcosmic selection of Sheffield urban terrain, Maud Haya Baviera collected a series of illustrated short stories about a protagonist called Liberty, Katy Woods displaced and re-presented an intriguing collection of found images and text, Sarah Staton offered a photograph of a building in Sheffield whose collision of styles, age and function in one structure reflects the city as a whole, Meriel Herbert’s photographic images of bodily gestures responded to the physicality of the book and the intimate relationship between viewer/reader and writer/artist, and Host Artists Group presented a curated exploration of multiple artists’ responses to the notion of beauty.