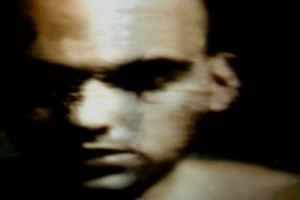 An exhibition looking at the crossovers apparent within the media of photography, painting and film in the work of Uta Barth, Duncan Higgins and Carter Potter. In the work of each artist the content seems to lie not in what the images depict but elsewhere – meaning seems to have moved to the margins – to the frame.

In Uta Barth’s images from the ‘Nowhere Near’ series, the repetition of shots of the same window taken over and over again, in slightly varying light conditions seem to drain the subject of meaning. The photographs appear painterly and also filmic, like a series of individual film frames which have no narrative to bring them together. Colour and form and figure and ground blur in these images which ‘challenge the art of looking’.

Duncan Higgins work references film in the series of 24 paintings, each of which have tiny differences from the last, tracing a path from representation to abstraction in the equivalent of one second of film running time. He is preoccupied with intervals of time and space and the perception of light where ‘vision is not longer the possibility of seeing but the impossibility of not seeing’.

Carter Potter’s ‘film paintings’ are made using the leaders from 70mm IMAX film – the wasted frames which count down to the feature presentation and which separate the viewer from ‘real’ experience and the narrative of film. Importance is given to the frame of the subject again rather than the subject itself.

Perhaps it is because of their apparent emptiness that the images in the exhibition remain so compelling: offering the possibility of a different kind of space for fantasy and memory, reflection and imagination.

The exhibition is accompanied by a catalogue with essays by Joanne Lee and Robert Clark.